This novel has won a vast amount of praise and is the first Korean novel to be awarded the 2016 Man Booker International Prize. Published in Korean in 2007, it is partially based on Kang’s 1997 short story ‘The Fruit of My Woman’, where a woman turns into a plant (it was published in English in 2015 in a collection of Kang’s stories).

The Vegetarian is a disturbing book, although structurally it is not actually a novel but three connected novellas. In the first, an unremarkable woman called Yeong-hye suddenly announces to her husband that she is becoming vegetarian, and has thrown away all the meat in the freezer. She is not clear on the reason, aside from saying that she had a dream.

It should be said that Korean culture places great stock in dream messages. But it should also be said that vegetarianism is unusual in Korea (aside from the substantial number of Buddhists in the country). Koreans are actually quite proud of their meat-heavy cuisine, as it indicates that the company has become prosperous after decades of post-war struggle. So in choosing this course with little explanation to her husband means that Yeong-hye is breaking a number of entrenched social rules.

The rest of the first novella involves the husband and others of her family trying to make sense of what is going on, even as she seems to move further into a world of her own. When her father tries to force a piece of pork down her throat she stabs herself, but after that she seems strangely indifferent.

It is this sense of remove, as well as her transforming body, that attracts her brother-in-law, an artist struggling through a dry spell, to her in the second novella. His attempt to use her as a model to reinvigorate his work ends badly for everyone; the circle of social collapse kicked off by Yeong-hye decision is spreading.

The third novel revolves around her sister, In-hye, who watches Yeong-hye’s physical and mental condition deteriorate after she gives up eating altogether. We find out more about Yeong-hye’s dense, violent dreams, although we never really learn the underlying causes for her slow-motion suicide. Increasingly invasive methods of force-feeding do not achieve much; she has effectively left the world of the living already. For In-hye there are recurring images of the trees in the hospital grounds, matching those of Yeong-hye’s labyrinthine subconscious. Connections that lead nowhere, threads that make nothing, answers that provide only more questions. There is a Kafkaesque quality to the pointlessness, but also a certain inevitability. Yeong-hye has, in her own way, broken loose from the strictures of Korean society, and indeed of humanity. She becomes free only to die in a method of her choosing: is this victory or the worst possible defeat? Kang does not offer an answer.

No solutions, but instead there is some beautiful writing, and many striking images. Each section has its own rhythm and tone, so perfectly constructed that one almost forgets the bizarre, tragic narrative. It is a piece of work that stays with you, in a way that is haunting, querulous, and unique. 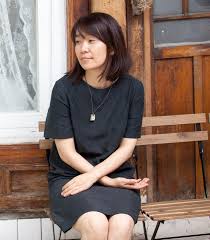