There’s always the unexpected, isn’t there? The chattering classes, the media commentariat, the denizens of the Canberra bubble: all of them thought that the 2019 election was over before it started. The Coalition would be swept from office, the Labor Party would be returned to its place as the natural party of government, all would be right with the world. Didn’t work out that way. Sorry. 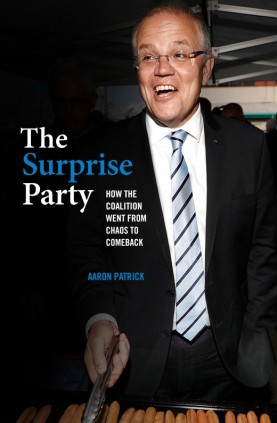 It’s a strange story, the tale of the election campaign, and Patrick is a good person to tell it. His previous books, Downfall: How the Labor Party Ripped Itself Apart and Credlin & Co: How the Abbott Government Destroyed Itself, established him as a fair-minded writer and a careful researcher. As a senior writer for the Financial Review he had a ringside seat for the twists and turns of the campaign as well as access to key people, and he is experienced enough to not take too much at face value.

A central element in the view that the Coalition was doomed were the opinion polls, which had shown Labor ahead for years. It seemed that the public, after the government churning through leadership dramas and policy failures, were waiting with baseball bats. The Labor policymakers agreed, signing off on a suite of big, complex policies. It was mainly the old-time religion, with more taxes and more money for anyone who put their hand out, but a new wrinkle was a belief that the public was hungry for radical solutions on the climate change issue.

The one area of weakness for Labor in the polls was Shorten, who was consistently behind Morrison. No matter, said the old hands: every PM usually polls better than the Opposition Leader.

To many on the Labor side, Morrison – ScoMo – was a figure of ridicule. Beefy and suburban, he even went to a Pentecostal church, where he sang and clapped and prayed. You could almost hear the Labor elite saying: really!? Church!? In 2019!? He’s dead.

Patrick provides an interesting discussion on this point. He speculates that faith might be more important to Australians than previously realised, but the point of Morrison going to church (and being filmed) was that it indicated his authenticity. What you see is what you get.

Middle Australia, on the other hand, never really trusted Shorten. No-one knew what he believed in, except his own ambition. The story he told of his working-class background did not fit the facts, and his attacks on ‘the big end of town’ sounded like a sound-bite package. Patrick reiterates a comment that how could a man who had changed his faith, his wife, and his football team be trusted.

Personal shortcomings might not have mattered if Shorten had been able to sell the policy package. But he kept getting crucial details wrong, then backtracking. He seemed surprised that journalists would actually ask him difficult questions and check the answers. He was not helped by colleagues like Chris Bowen, who said that if voters did not like the policy on franking credits they should not vote Labor. In fact, this policy – framed by the Coalition as a “retirees’ tax” – was one of the key game changers.

Another was the Labor attitude on climate change policy. It came across as an attack on the fossil fuels sector, which was a killer in Queensland especially. Even worse, Shorten could not explain how it would work, how much it would cost, and who would pay for it. The Greens, always willing to open their mouths and put their foot in it, created a huge problem for Labor with a caravan of protesters to the communities near the Adani coal mine, where they happily told people how awful they were.

Yes, there was plenty of dishonesty on both sides, and Patrick analyses the major examples. The Liberals had been taken unaware by the ‘Mediscare’ campaign in 2013 and were determined they would go on the attack, and did so with gusto. Labor’s assertions that there had been huge cuts to social spending did not fare well, with the Coalition ready with reams of refuting statistics. Even the ABC was sceptical of the Labor claims, which should have sounded a very loud warning bell.

Patrick notes that while the public polls through the campaign showed Labor ahead the parties’ internal polls revealed a different story. Broken down into regions and seats it was even worse. Maybe this is why Morrison seemed to increase his energy over the campaign, while Shorten started fraying.

Nevertheless, on election eve Labor was still sure of triumph. The actual results were a devastating shock, with some journalists refusing to accept the trends until the numbers could no longer be ignored. In the end, only a small number of seats changed hands, although it was enough to give the Coalition a working majority.

But this was not just a personal vindication for Morrison, says Patrick. He looks at data showing that many of the people who switched to Labor were in the upper brackets for income and education. Conversely, many of those who switched to the Coalition were what Labor considered to be its blue-collar base. This is something the new Labor leaders will have to look at closely.

The reasons are not clear. Was it just dislike of Shorten and Labor’s policies or are larger factors at work? Has the social conservatism of the non-elites overtaken historic economic allegiances? It is too early to tell, but we might look back on this election as a pivot point. If so, this book will be a good one to go to.